Tambopata – A tropical paradise in the shadow of gold | Part 5

The wildlife messengers | by George Olah on 31 December 2020

The Tambopata National Reserve has celebrated its 20th anniversary in 2020. However, the integrity of the reserve and the adjacent Bahuaja Sonene National Park are now facing a new kind of threat. When examining satellite maps in detail, the protected area services became aware of traces of strange, longitudinal deforested patches, which proved to be runways for light aircraft! There are more and more reports of low-flying small aircraft, even near to a remote research center. And the river sometimes washes out plastic barrels from the area of the supposedly uninhabited park…

The activities reported in the introduction seem to support the emergence of coca plantations and cocaine smugglers in the area. The less populated, remote, isolated area and its proximity to the Bolivian border provides an ideal location for these illegal activities. Access by conservation agencies to regularly updated satellite maps and drones capable of flying long distances can help control more remote areas and, when necessary, raids can be organized with the military. During several of these raids, cocaine-laden small aircrafts were seized, some of them with Bolivian insignia. According to an analysis by the Peruvian secret service, the final destination of the shipments would have been Europe. There has been no precedent for conflict with researchers so far, but in the future, we definitely need to be more careful when studying these remote places, as now we can also expect to run into armed cocaine smugglers in the forest, which must be more dangerous than jaguars.

The Tambopata Research Center eco-lodge, described earlier, has been expanded in recent years and now the guests can enjoy the rainforest in luxurious conditions. Rainforest Expeditions took a different approach to research around their lodges, and now providing citizen science opportunities to their guests in various WiredAmazon projects. Ordinary untrained people become biologists for a few days and gain fulfilling insights into how the forest functions from a scientific perspective. In these pandemic lockdown times, it is not even necessary to travel all the way to the jungle for this.

Mammal researchers have deployed hundreds of camera traps in Tambopata, from ground levels to the highest levels in the canopy, which are activated by motion and capture photos and videos of the animals passing in front of them. There is a lot of movement in a tropical rainforest day and night, and so the researchers alone would have a hard time analyzing the huge number of shots captured. On the other hand, enthusiastic people can help identify species online, using different guides available via the AmazonCam project. Through identification people learn a lot about the wildlife of the rainforest. Primatologists study all the eight primate species living in the area, while they also try to identify them as individuals based on their external features captured by the camera traps. In addition, ecotourists visiting Tambopata can also contribute to the “monkey facebook”, provided they managed to take some good shots of the monkeys. By analyzing these data, researchers can answer questions such as the size of the monkey populations in the area – using photographs for the capture-mark-recapture technique discussed earlier in this series – or how individuals use their territory and what behaviors they show.

Botanists are not left out of citizen science opportunities. Dr. Varun Swamy uses drones to make systematic shots of the canopy of the surrounding rainforest. Enthusiastic volunteers from all over the world can help his work via the Amazon Aerobotany project by identifying different tree species on the images and also recording data on flowering patterns. Those who would rather just admire the wildlife of Tambopata from their armchair, which has become quite relevant nowadays, can view magnificent species such as harpy eagles at their nest via webcam. Since 2019, the Macaw Project also operates as a citizen science project, part of the WiredAmazon.

A video interview about the research of Dr. Swamy in Tambopata. © Wildlife Messengers

Scientific research on macaws continues under the auspices of The Macaw Society established by biologists who have been conducting long-term academic research in the Tambopata area and other locations in the neotropics. As a new wave of this research, Dr. Gabriela Vigo, mentioned in the 2nd part of this series, has developed a conservation method with her team to increase the size of macaw populations. The essence of the method is to hand-raise wild macaw chicks in artificial incubators set up on-location. These are usually the third hatched chicks that usually die due to malnutrition in the wild clutch. Once strong and healthy, these nestlings are then given for “adoption” to macaw foster parents, usually pairs with only one chick in their nest. So far, 81% of the adopted nestlings fledged successfully from their step-parents’ nests, thereby increasing breeding success of the population and reducing the number of chicks that die from starvation.

This method, developed in Tambopata, promises to be successful in other regions as well and will be used in macaw populations where their numbers have declined drastically. Such is the case for example in Costa Rica and Guatemala, where another subspecies of the Scarlet Macaw (Ara macao cyanoptera) lives but is much more threatened than its South American relative. Biologist Rony Garcia and his macaw researcher team of the Wildlife Conservation Society Guatemala are already using this method and also installing artificial nests, described in the previous parts.

The Lacandon rainforest of Chiapas is home to the last surviving Scarlet Macaw population in Mexico, estimated to be between 600 and 700 individuals. Biologist Rodrigo León has been working on these macaws with the local NGO Natura Mexicana. They are also adopting the techniques developed by Dr. Vigo and her research team. They even started a reintroduction program that will also include some genetic testing of the wild population and the reintroduced individuals. Furthermore, the Rewilding Argentina Foundation has been recently implementing the foster parent technique for Scarlet Macaw reintroduction to the Iberá wetlands of Argentina. All these applications stress the importance of developing new conservation techniques in forests where healthy macaw populations still exist, like the one in Tambopata.

As a result of the unification of the three Ese’eja communities mentioned in the earlier parts, the Peruvian State recognized the Ese’eja Nation. In this way, they can formally establish rights to their ancestral lands in the Tambopata River Basin. With their stable presence, these peoples have a protective effect on the wildlife in the area and curbing deforestation activities such as gold mining, logging, oil extraction, and coca plantations. The Native Community of Infierno founded an eco-tourism company called Bahuaja Expeditions after the local name of the Tambopata River. They recently built the Ñape eco-tourism center, which is 100% owned by and located in the community. If someone plans to visit this area after the pandemic, it is recommended doing so with Bahuaja Expeditions.

Unfortunately, the COVID-19 pandemic has reached all three Ese’eja communities and claimed the lives of three community members. The customs and legends of the tribe, and even their own language live almost exclusively in the memory of their elders and are increasingly difficult to pass on to future generations in these modern times. Because of this, losing elders can also lead to loss of tribal identity. Therefore, our organization, Wildlife Messengers, in collaboration with The Macaw Society, Anthropologist Dr. Amanda Stronza, the Doctors Without Borders, and with the individual support of a number of enthusiastic volunteers, sent medications, masks, food, and aid kits to help these communities. We also prepared educational materials and held online trainings to help the community to be better prepared to face another epidemic and to adapt to our rapidly changing world. For more details, you can read the final report of our Ese’eja COVID-19 campaign.

An oropendola is welcoming a new day over the misty rainforest of Tambopata. © George Olah

According to a local saying, someone drinking from the Tambopata River will return there. Many of my friends joked that I must have drank a good deal of it. Indeed, since my first visit in 2008, I have returned almost every year to do research, filming, or to participate in the local eco-tourism industry. My friend and teacher Brigitta Bárány played a major role in encouraging me for undertaking international research trips and positions like these. Sadly, she recently departed way too early, and I would like to dedicate this article series to her memory.

Tambopata has changed a lot since I first arrived more than a decade ago. Nowadays, its future has become more doubtful. But the good and the bad changes might sooner or later balance each other out. It is encouraging to know that our planet still has some distant worlds where nature is still surviving in a pristine form, where some of our fellow human beings live nomadically, untouched by our modern civilization. It is up to us whether we preserve these regions in their current state, or they only reach posterity in the form of digital datasets and film frames. Our publications provide scientific evidence for the biological importance of Tambopata, while our films disseminate this knowledge in a more visual and emotional way around the world. Perhaps the combined effects will achieve the expected results and this tropical paradise may one day escape the shadow of gold and other destructive activities. 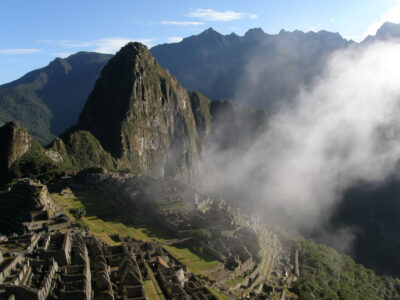